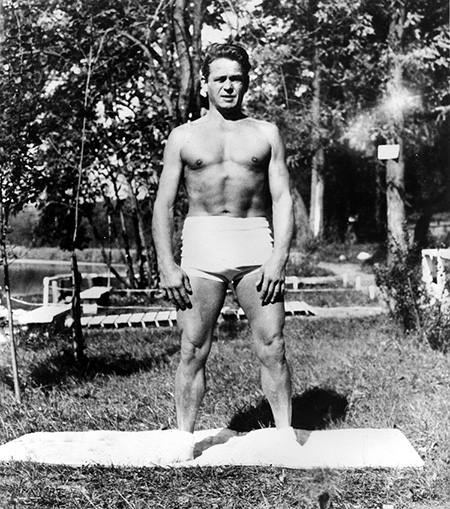 Joseph H. Pilates was born in Germany in 1883. His interest in physical fitness stemmed from being a sickly child. He dedicated his entire life to becoming physically stronger. Joe studied bodybuilding and gymnastics and by the age of 14 was fit enough to pose for anatomical charts.

In 1914 he moved to England earning a living as a boxer, circus performer and self-defense trainer. During World War I he was interned with other German citizens in a camp near Lancaster where he trained other inmates in fitness and exercises. It was here that the beginnings on the Pilates Method began to take shape.

After the War, Pilates emigrated to the USA. On the ship to America he met his future wife Clara. The couple founded a studio in New York City and directly taught and supervised their students well into the 1960’s. Well-known dancers became devotees and sent their students to them for training.

Joseph Pilates did not just develop a brilliant approach to fitness that includes over 500 exercises: he also engineered all the equipment required to teach them properly.

In 1941 a young dancer with an injured ankle was sent to study with Joseph Pilates in his studio. That dancer was Romana Kryzanowska. Under Pilates’ instruction she recovered from her injury, and stayed on in the studio to study and teach side by side with Pilates.

Romana is the Portege of Joseph Pilates and Classical Pilates has been defined as „The exact exercises and ideas that Joseph Pilates and his wife Clara taught to Romana Kryzanowska“. When he died in 1967, she was the person who took over the running of his studio.

THE SIX PRINCIPLES OF PILATES

„The Art of Contrology“ was Joseph Pilates’ preferred name for his method. The Pilates Method teaches you to be in control of your body. You become more aware of your movements, develop the skill to prevent bad habits and correct your posture. Every movement of each Pilates exercise requires complete concentration.

The energy used for performing Pilates exercises is believed to be drawn from the center of your body. Joseph Pilates called this center „powerhouse“. The method focuses on strengthening the deep core muscles of the abdominals, hips, back and buttocks.

Maximum benefit will be obtained from each movement if you bring full attention to the exercise and do it with full commitment. Conscious presence makes the movements more precise and you will not get distracted in other thoughts.

There is an appropriate placement, alignment relative to other body parts, and trajectory for each part of the body. The aim is on doing one precise and perfect movement, rather than many half-hearted ones. The essence of a Pilates workout is quality of movement over quantity of movement.

All exercises are done with the rhythm of the breath. To achieve the correct rhythm, one must inhale on the effort to send fresh oxygen to the muscles when they need it. He advocated thinking of the lungs as a bellows − using them strongly to pump the air fully in and out of the body. He advised people to squeeze out the lungs as you would wring a wet towel dry. Pilates saw forced exhalation as the key to full inhalation.

Pilates exercises are done in a flowing manner. Fluidity and ease are goals applied to all exercises. Each movement has a sequence and transition from one exercise to another is performed with elegant flow.